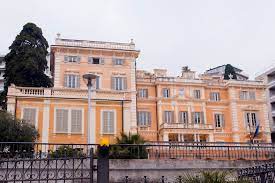 The current building is the result of a set of expansions of the original villa designed in 1864 by the local surveyor and contractor Giovenale Gastaldi for the Marquis Eugenio Dufour, a Tuscan general, who in 1874 gave it to the duke Amedeo of Savoia (whose wife, Maria Vittoria, was suffering from tuberculosis).

In the same year the Dukes had an unexpected and extraordinary guest: Maria Alexandrovna, married with the Czar Alessandro II.

The town authorities called the Duke of Aosta who organized the stay of Sanremo for Maria Alexandrovna in a great hurry.

Inside the villa we can see the fresco of the Aosta family crest with a memorial stone to celebrate the Royal Family.

Later in 1903, the villa was sold to Duke Gandolfo who called the architect Pio Soli to develop an extension of the building. In fact, he added  two lateral wings and one floor.

This new building was called “Villa Magnolie” and it was destined to be a residence for aristocratic foreign families. We remember the stay of  Princess Kadjar from the dynasty of the Shah of Persia (who had been overthrown in a coup).

In 1925, Villa Magnolie became the residence for the court of the last  Ottoman Sultan, Mohammed VI, who had moved from Villa Nobel, where he had been living up to that period. Here he died in mysterious circumstances, in 1926.

After 1928 this Villa became school for the English who were living in town.

Later it changed its name in “St. George’s School Sanremo”.  In 1936 it was closed after the break of the relationships between the Italian fascist government and the United Kingdom.

Around the ‘50ies it became a Catholic private school administered by the Doctrinaire Fathers and it operated until the ’80s.

After a long period of shut down, in 2005 Villa Magnolie was bought by the province of Imperia that restored the building and gave it  to “G. D. Cassini High School”.